How To Fix Ban Issue On GBWhatsApp, FMWhatsApp Or Any Other WhatsApp Mods 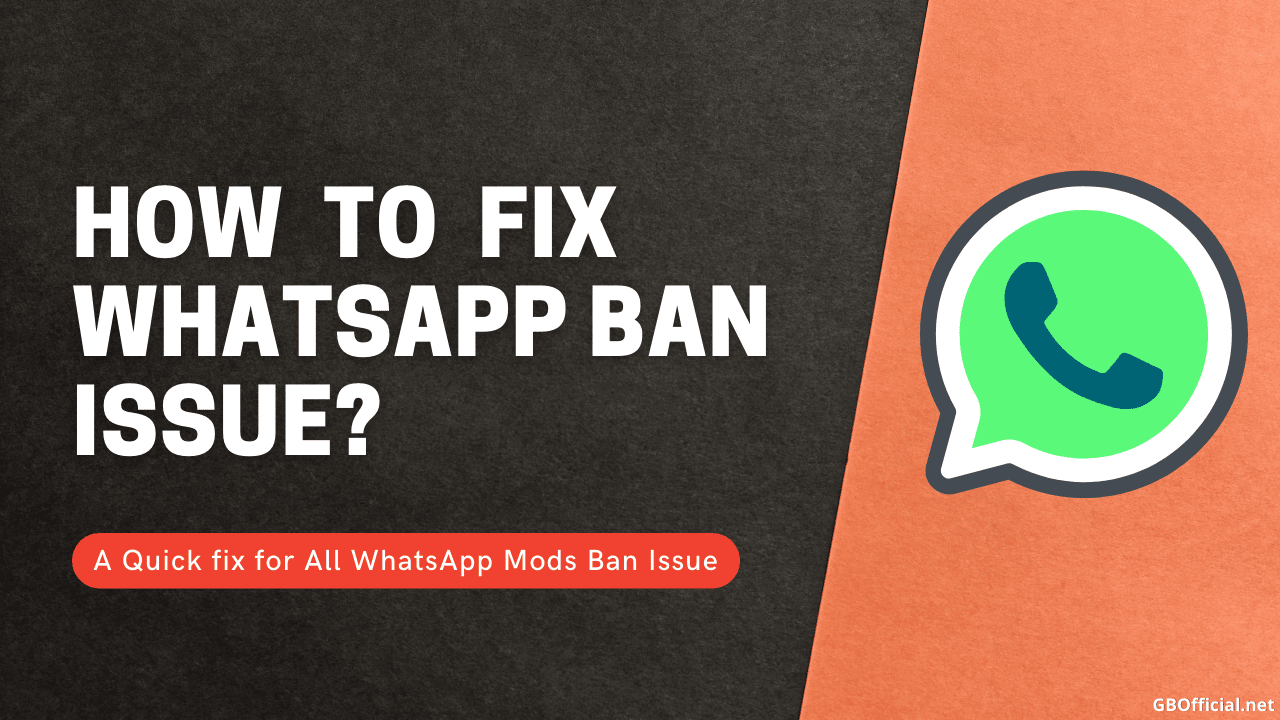 You might know that all these WhatsApp Mods don’t come from the official WhatsApp developers. These WhatsApp Mods are tweaked and changes in the code are made so that users can take advantages of the features that are not previously present in the Original WhatsApp Version. Doing such changes tend to be the cause of such issues while using the WhatsApp Mods.

WhatsApp Mods such as GBWhatsApp, WhatsApp Plus, YoWA & FMWA have been with us for quite a time now. Previously users could use any of these WhatsApp Mods without any issues. But due to the recent changes in the WhatsApp Privacy Policy, Users who use third party mods are found to be violating the Terms of Use and Privacy Policy of official WhatsApp. This policy violation led to the ban of the accounts operating on the Third Party WhatsApp versions.

What is the WhatsApp Ban Issue?

One of the most common issues that users face while using the app is the Ban issue or a Temporary Ban on the account using WhatsApp Mods. As discussed previously, using third party WhatsApp mods is the reason behind such Bans on the accounts.

The following message is shown to the users:

“You’re temporarily banned from WhatsApp because you may have violated our terms of service. You’ll be able to use WhatsApp again in:”

Tips To Avoid Getting Banned on GBWhatsApp, FMWhatsApp, YoWhatsApp or Any Other WhatsApp Mods

The Anti-Ban Features of GBWA, FMWA are lifesaver but still, you have to be careful while using the app to avoid getting banned. Even though you have installed the latest version of your favourite WhatsApp Mods with Anti-Ban Feature, you still can be get banned for some reasons.

These reasons include misusing specific features, excessive use of features and unusual activity going on your WhatsApp.

Below we share some simple but important tips that you should follow so that you can continue using GBWhatsApp without any issues.

How to Fix WhatsApp Ban Issue on GBWA, FMWA or any other WhatsApp Mods?

The WhatsApp Ban issue was a serious concern once upon a time, but time to time there were fundamental changes in the WhatsApp Mods that fixed the ban issue eventually. But unfortunately if you are among one of the people who got banned for using WhatsApp Mods, we have got you covered.

Below are some of the most effective ways to fix the WhatsApp Ban issue if you are using GBWhatsApp, FMWhatsApp or any other WhatsApp Modded Apps.

One of the first things that you might want to do is to Install the Latest Version of WhatsApp Mods. Almost everyone who had faced the WhatsApp Ban issue has installed an older version of third party WhatsApp Mods like GBWA or FMWA on their phones. And that’s why most probably they faced the ban issue in the first place.

Almost all popular WhatsApp Mods such as GBWhatsApp, FMWhatsApp, YoWhatsApp started rolling out their apps with Anti-Ban Feature. This feature will prevent WhatsApp officials from banning your account so that you can continue using the third party version without any restrictions. Not only this, but the latest version also comes with many other great features that you won’t want to miss out on, so it is always better to use the latest versions of the WhatsApp Mod Apps.

So first things first, verify if you are running the latest versions of WhatsApp Mods or not.

How To Check GBWhatsApp, FMWhatsApp Version?

2. Then Go to the WhatsApp Mod Settings. For Ex- GB Setting or FM Setting

Tap on the About or Upgrade GB button, this will show you the GBWhatsApp or any other Third-party WhatsApp Mod Version Number.

The Latest Versions of All WhatsApp Mods are given below. Download and install them, this shall fix the WhatsApp Ban issue readily. But, if the problem still exists, then check out the next method below.

If you have not done anything suspicious and still got banned, you will still be able to get your account back.

To get your Banned WhatsApp account back, you have to download any other WhatsApp Mod, except the one you used previously. For ex- If you got banned on GBWhatsApp then you should download the FMWhatsApp or YoWhatsApp.

After Downloading the app, register your number as usual and try to login into the app. You will be logged into the same WhatsApp Number account that you got banned from. Once you log in, you can now restore the data if you had the backup. If the backup is not available you can start off fresh.

Now that your account got unbanned, you can uninstall the current WhatsApp Mod and download the one you like and start using WhatsApp on that app.

So these were some simple steps you can follow to solve the Banned GBWhatsApp/ FMWhatsApp Account issue.

For the past couple of years, there was a huge demand for WhatsApp modded apps such as GBWhatsApp, FMWhatsApp. Given the awesome features provided by the WhatsApp Mod developers, users sometimes get banned by WhatsApp Officials for misusing/ overusing the features.

We talk about how to fix this issue and also, In the end, we have provided some tips that you can keep in mind to not get banned ever again. We will come up and try to solve as much as issues possible related to Third Party WhatsApp Versions such as GBWA, FMWA, etc. Till then, Good Bye!